Curling is a team game; no matter it’s the traditional game of four team members or newly introduced mixed double of just two. Each of the team members’ efforts contribute directly to each shot. Teams can be composed of both sexes and all ages, and curling is a lifetime sport. Once, a curler has attained certain physical skill level of the game. The skills acquired will decline only gradually.  Lola Holmes of Vancouver Curling Club, who was still on ice to celebrate her 100th birthday in September 2019. 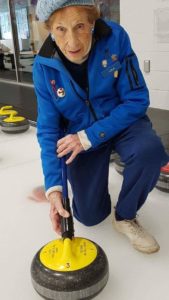 The key difference separates the good player from the champion is the mental aspect of the game with great nerves, will to win, and mental toughness. 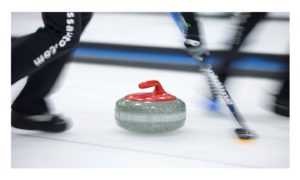 It is generally agreed that this good natured sport was developed in Scotland in the 16th century. The climate in Scotland was colder then, and curling took place on the many marshes (since drained).

Scottish curled on the frozen marshes using “channel stones,” which were naturally smoothed by the water’s action. The principles of the game were similar to the modern game, although there were many differences in rules and equipment. 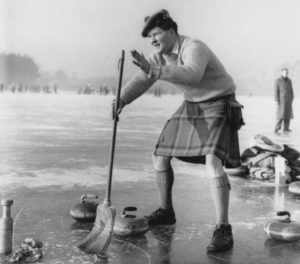 The spirit of curling evolved in the early centuries in Scotland. It is this spirit of honorable competition followed by egalitarian sociality that made curling a special game in curlers’ minds. An excerpt from “The Spirit of Curling”

“Curlers play to win but never to humble their opponents. A true curler would prefer to lose rather than win unfairly…while the main object of the game is to determine the relative skill of the players, the spirit of the game demands good sportsmanship, kindly feeling, and honorable conduct.”

Scottish immigrants brought the game with them to North America, first to Canada around 1759, then to the United States around 1832. Curling in the rest of Europe developed in the 20th century. Whereas in Asia, Japan was the first country to start curling in 1937 but not until 1980 then curling was actually developed into as a social and community sport. 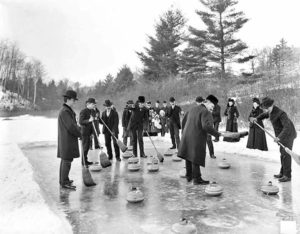 Curling was introduced to the equatorial countries by the expatriates living in Singapore in 1998. It was almost 2 decades later in 2018 that curling was officially promoted to the general public in Malaysia and Thailand through “Curling in The Tropic Scheme” by International Curling Academy

Two developments ensured that the modern game would be marked by a high degree of physical skill and mental toughness: the standardization of the stone, and Indoor refrigerated ice. The modern stone is round, and about 20 kg. Curling is played, for the most part, on indoor, refrigerated ice, which helps ensure a fast, consistent and predictable playing surface. 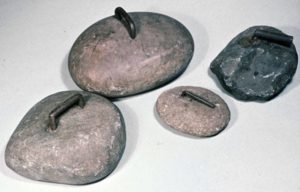 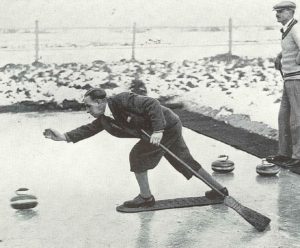 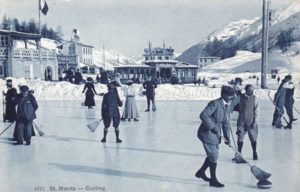 From 1998 onwards Curling is an Olympic and Paralympic Winter Sport with medal disciplines for Women’s, Men’s, Mixed Doubles and mixed Wheelchair teams.

Traditional curling teams are made up of four players while the mixed doubles variation of the sport consists of teams of two players, one female and one male. In women’s, men’s and wheelchair curling, teams can also have a fifth player known as the Alternate – a substitute. Each team designates a Skip – team captain – and Vice-Skip.

The role of the skip is to direct play for the team and they are found standing in the house at the scoring end of the sheet. The vice-skip takes over the skip’s duties for the team when the skip is delivering their stones.

In team curling, each player delivers two stones, in consecutive order, in each End – a round – while alternating with an opponent. Each team uses a set of eight stones all with the same handle colour – red or yellow at World Curling events.

The playing positions are commonly known as Lead, Second, Third and Fourth. The lead is the player who delivers the first two stones. The second plays the third and fourth stones. The third plays the fifth and sixth stones and the fourth plays the last two stones. Skips usually play fourth, but that’s not essential.

In mixed doubles, both teams play five stones each. They begin every end with one stone, per team, pre-placed therefore it’s possible to score six points in an end. One player plays the first and fifth stones while the other player plays stones two, three and four.

The field of play – curling ice

Curling is played on a very long strip of specially prepared ice called a Sheet.

A sheet of curling ice is over 45 metres long and a maximum of five metres wide. At each end of the sheet there are two circles that look like target, known as houses. Each house consists of four rings which help define which curling stones are closest to the centre, commonly known as the Button.

Scoring and the basics of the game

A team scores one point for each of its own stones located in or touching the house that are closer to the centre than any stone of the opposite team. Only one team can score in an end. If no team’s stones are touching the house at the conclusion of an end, no points are scored. This is called a blank end.

The teams take it in turns to deliver their stones from the Hack at one end of the sheet to the house at the opposite end. Players must release the stone before the Hog Line for the stone to be considered in play. Stones which do not pass the hog line at the scoring end of the sheet are removed from play. When an end is complete, the next end is played in the opposite direction.

After all stones have been delivered to the scoring end of the sheet, the players themselves calculate the score.

Curling is played over ten ends, however in some formats and competitions this may be reduced to eight ends. Teams can concede their game earlier than the defined number of ends according to the rules of the competition. The teams with the most points at this stage wins the game.

Before a game of curling begins, teams decide who will have what is called the Hammer or Last Stone Advantage. For social or friendly games this can be decided in a less formal way by toss a coin or Rock, Paper, Scissors. In championship curling this is decided by a draw to the button with two players from each team delivering a stone as close as possible to the centre of the house – one stone is delivered clockwise and the other counter-clockwise – and the distance from the stone to the centre being measured. This process is called the Last Stone Draw or LSD.

Teams generally try to score more than a single point in an end and will, therefore, sometimes blank an end, ensuring that no stones are lying in the house after the last stone is played. This means they get to keep the hammer for the next end. However, in mixed doubles, a blank end also causes the hammer to be passed to the opposing team.

In mixed doubles, teams have the right to use a power play once in every game. To utilise the power play, it must be called at the beginning of an end, by the team who have the decision on the placement of the “positioned” stones.

An average game of championship curling lasts up to three hours. Teams are given a set amount of Thinking Time depending on the discipline and number of ends being played. In traditional ten-end games, each team receives 38 minutes of thinking time. This is reduced to 30 minutes for eight-end games. Wheelchair curling teams receive 38 minutes of thinking time for an eight-end game, while mixed doubles teams receive 22 minutes.

To play curling, a set of stones are needed. They are made of a special type of granite and weigh almost 20 kilos each.

Each curler has their own brush and a pair of special curling shoes with one sole that grips the ice and one slippery sole – called a Slider – to be able to slide with a stone during delivery. A gripper is a removable rubber sole to protect the slider, keep it clean and allow the curler to be stable on the ice.

There are three types of curling shots – a Guard, a Draw and a Take-out, but there are many variations of these shots.

Guards are thrown to the front of the house, to the Free Guard Zone – the space between the hog line and the house – to protect stones in the house.

Draws are shots that are delivered to reach the house and establish a scoring position.

Take-outs are shots that remove stones from play.

When in motion a stone will curl across the sheet of ice. When delivering a stone, players will turn the stone clockwise or counter-clockwise. By applying a rotation, and making the stone curl on the pebbled ice, players have more control over where the stone comes to rest.

The idea of sweeping is to gently warm the surface of the ice where the stone will glide across. In order to do this, you have to sweep the ice with downward force.

Often, you may hear players shouting “Hurry! Hard!”. Because of the length of the sheet of curling ice, curlers often shout to communicate with teammates. However, there are teams that do not shout and use a series of hand signals that have been developed for the game instead.

Wheelchair curling is for individuals who are unable to walk or can only walk short distances. This includes players with significant impairments in lower leg/gait function, such as spinal injury, cerebral palsy, multiple sclerosis or leg amputation, who use a wheelchair for mobility.

Wheelchair curling is a mixed team discipline meaning each team must be comprised of female and male players. Delivery of the stones may be aided by the use of delivery sticks and there is no sweeping.